Tobacco mosaic virus (TMV) is an RNA virus. It infects plants, especially tobacco and another member of the family Solanaceae. Its infection causes a characteristic pattern. It causes molting and discoloration on the leaves. Therefore, it is called the Mosaic virus. TMV was the first virus that was discovered. Tobacco mosaic disease also is known from the late 19th century. It was an infectious disease that damaged tobacco crops. But in 1930 it was discovered that the infectious agent of this disease was a virus.

Adolf Mayer: He first studied the disease in 1883. He found that this disease could be transferred between plants, similar to bacterial infection.
Dimitri Ivanovski: He gave the first evidence that this is a non-bacterial infectious agent. He found in 1892 that infected sap remained infectious eve after filtering through Chamberland filter papers.

Martinus Bejierinck: In 1898, he showed that a filter, bacteria-free culture medium still contained the infectious agent.

Meredith Stanley: He crystallized the virus in 1935. He showed that it remains active even after crystallization. For this work, he was awarded 1/4 of the Nobel prize in chemistry in 1946.

Gustav Kausche and Coworkers: They took first electron microscopical pictures of TMV in 1939.

Heinz Fraenkel-Conrat and Robley Williams: They showed that Purified TMV RNA and its capsid (coat) protein assemble themselves to functional viruses. It indicates that it is the most stable structure.

Rosalind Franklin: He was a crystallographer. He designed and built a model TMV. In 1958, she said that the virus was hollow, not solid. He hypothesized that the RNA of TMV is single-stranded. Later, this hypothesis was proved to be correct after her death.

The tobacco mosaic virus has a rod-like appearance. It is an RNA virus. Virions are 300nm long in length and 18nm wide in diameter. Negatively stained electron microphotographs show a different inner channel of 4nm.
Capsid: Its capsid is made from 2130 molecules of the coat protein. The coat protein looks like the rod-like helical structure. The protein monomer consists of 158 amino acids. These are assembled into four main alpha-helices.
RNA: The one molecule has 6400 long basses of RNA. RNA is present within the helical structure. This RNA forms a hairpin loop structure. The RNA is located at a radius of 6nm which is protected from the action of cellular enzymes by the coat protein. There are three RNA nucleotides per protein monomer. 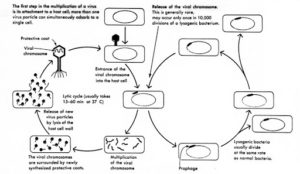 Lytic cycle of the phage viruses 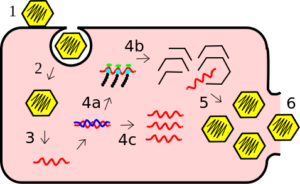 Reproduction in Viruses-Coronavirus-Structure- replication, and lifecycle 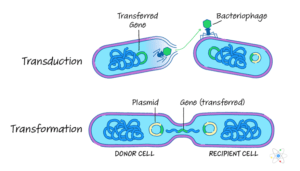 Transduction Process in Bacteria And Its Types 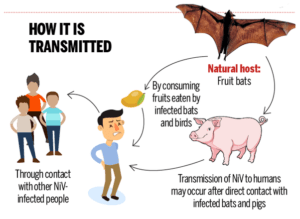